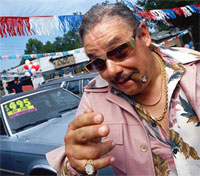 Have you used another render farm service before?  Did they make you purchase “points”, “credits”, or other silly terms in advance of being able to render your scene?  If so, they are guilty of the snakeoil salesmanship that seems to have a firm hold of our industry.  There are two reasons why a render farm service would implement such a scheme.  The first is for reasons of self-defense, but the second is just evil.

To their credit (horrible pun intended), render farm services are faced with the challenge of how to collect payment from users.  It’s more common (than we’d like) that users seem to have no estimate as regards how much render time their scenes will consume, and hence no idea of the costs.  This can lead to collections issues when users render complex projects that end up costing more than they are willing to pay.  Implementing a pay-up-front scheme, where the user buys render points or credits, may mitigate some of those collection issues.  Depending upon implementation, it may prevent run-away costs and give the user some peace of mind.  The legitimacy of pre-paying for rendering stops there, in our opinion.

The unstated reason render farm services use a non-monetary value unit that they equate to render time is that doing so obfuscates the user from how much they are actually spending.  If you have to convert from:

…there’s something lost in translation.  Render farm services that use this approach hope you won’t notice how much the actual compute time costs.  They hope the smokescreen of their virtual currency will lull you into spending more.

We don’t separate cost from compute time by a fictitious value.  In fact, to the opposite, we display the exact “Cost Consumed” as your renders are running.  We also give a job “Cost Estimate” as soon as the first portions of your job complete, and we keep that updated as more portions complete.  If that wasn’t enough, you have the power to submit jobs with a budget limit.  Render jobs that hit their budget limit will be automatically suspended, and you’ll be immediately notified by email.  All of these features are designed to be honest, up-front, and crystal clear about what your render jobs are costing you.  We don’t think we should have to lie to get you to spend more money.  How much you spend is your choice, so we simply give you the tools you need to stay in control of your wallet.  We hope you’ll agree.

This hasn’t stopped many people from accusing us of stooping to the point/credit scheme.  We’re not entirely sure where people get the idea we’re scammers, but it could be that we charge $10 to sign up for our services.  As stated on the sign up page, though, we only charge that in order to verify that the credit card and address information you enter is valid.  The full $10 is automatically added to your shiny new account as a credit, applicable to all future jobs until it is used up.  We do have to validate CC info, unfortunately.  You’d be amazed how many people have tried to sign up with fake information!

If you’re using one of the other guys, give Pixel Plow a try.  That is, unless you have snakes running low on oil.