Scene files created using a variety of Vue versions and builds may be sent to Pixel Plow for rendering.  Unfortunately, due to the way E-on has developed Vue over the years, there are some incompatibilities when newer software opens scene files created by older software.  We do our best to work around these problems, but some are inherent in the software itself, and as such, can not be avoided.  Check the Vue versions page for the specific version and build we are currently running.  In general, the more feature limited builds within the same Vue version work fine.

At present, we do not support tiled rendering in Vue, so single frame jobs will be rendered on a single CPU.  Output formats, types, and resolutions should all be defined in your scene file.  We highly recommend frame numbers be included in the output file names, as lack of them will confuse our system as to what should and should not be delivered.  An example of how to define output names and formats is below: 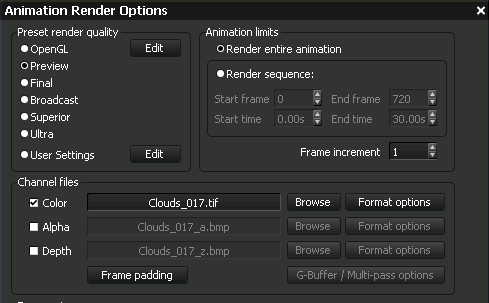