3D Studio Max scene files that use the V-Ray render engine require the user to pay a little bit of attention to their scene file settings prior to submitting a render job.  Most of this attention should be given to the GI configuration if you have pre-rendered a light cache or irradiance map, but first, a word about the VFB.

Use of the VFB (V-ray frame buffer) and its associated outputs is discouraged.  The reason for this is that the VFB can apply its own gamma to rendered output on your machine, effectively changing your view of the actual file output.  Since our system delivers the file output without applying any VFB-based gamma correction (Max scene file gamma is honored), you may incorrectly think the results our system delivers are too dark, too bright, or have incorrect colors.  If you disable the VFB in your scene file, you can’t be fooled by this.

Now on to GI handling.  If you have pre-rendered and saved either a light cache or irradiance map, you will need to point to those files via relative pathing.  The easiest way to accomplish this is to put all saved files into the same folder as your scene file and define only a file name in the V-Ray GI settings fields like this: 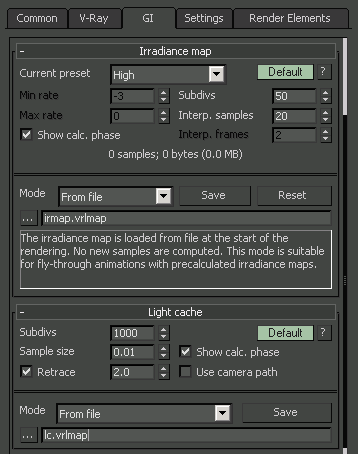 Of course, “From file” must be defined in the Mode settings of both light cache and irradiance map options if you wish to have this pre-rendered file loaded.  Our analysis script will attempt to open an irradiance map file defined in that field.  If the file can not be found or opened, due either to being missing or the path being incorrect, our system will create a GI pass version of your scene file so the irradiance map can be pre-rendered and stored prior to the final render pass.  You can confirm what our system determined by simply waiting until the end of the analysis pass as displayed in our queue viewer window.  If “GI pass” is displayed, then our system was not able to locate the pre-rendered  irradiance map definitions, or you purposefully did not pre-render and include it.  If “rendering” displays in the status column, then either your scene file doesn’t use cache-able GI solutions or all pre-rendered GI files were found.

It is important to note that, currently, only single irradiance map files can be found and opened.  If your pre-rendered irradiance maps are stored in separate files per frame, our script will not detect them.

If our system does not detect pre-rendered GI files, then it will define these options accordingly: